Students who attend Milwaukee Public Schools have formed a campaign called the Students Bill of Rights after a mass student walkout at ALAS High School in October. Student activist from YES! (Youth Empowerment Struggle) organized the walkout because of all the heavy budget cuts to MPS. Out of 215 students, 195 students walked out of ALAS high school. ALAS suffered from lack of funding for bilingual education, prison-like security issues, overcrowded classrooms, and a school administration that ignored the voice of the students. So they formed a Student Bill of Rights. View the Student Bill of Rights here. 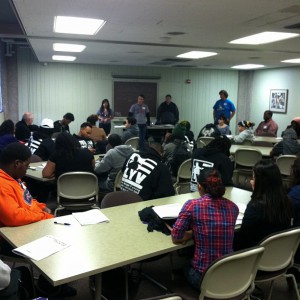 Yesterday, a little more than a year after the walk-out at ALAS High school, 42 different Milwaukee Public Schools (more than 400 students) met at UW-Milwaukee to at the ACLU Youth Social Justice Forum to learn how to organize around each specific issue on the Student Bill of Rights. The League of Young Voters, Urban Underground, Pathfinders, and Public Allies facilitated different trainings to the high school students.

A team of eight League organizers facilitated a training of 60 students on how to run a campaign about the issues that was most important to them listed on the Student Bill of Rights. I had a great time working with the students and hearing the different struggles they go through in high school. The students were passionate about making change in their schools and was eager to learn how to do it. The students came up with action plans that would make the decision makers have to listen to them. Glad to see young people not only standing up and speaking up, but taking action to see change in their schools.

On your mark, get set, GO! The race was on and the League of Young Voters trained, stood strong and began running! Working endlessly we did everything we could to ensure that young people and people in urban communities across the nation got out and exercised their right to vote.

On November 6,, we took our victory lap and when the night concluded and the final numbers were in we crossed the finish line, hands in the air; VICTORY now a reality.

Click through to read more about what we accomplished!

END_OF_DOCUMENT_TOKEN_TO_BE_REPLACED 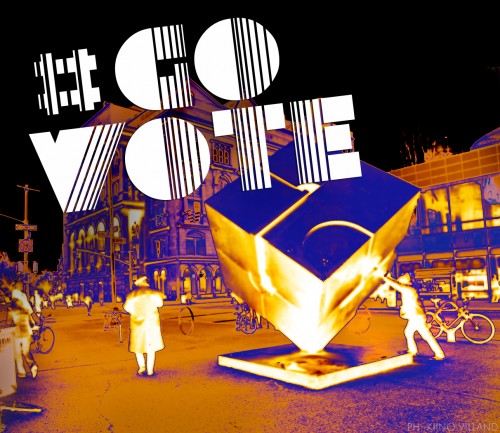 Young voters represented a greater share of the national electorate Tuesday than four years ago, once again voting for President Barack Obama by a huge margin, boosting his reelection.

Voters from ages 18 to 29 represented 19 percent of all those who voted on Tuesday, according to the early National Exit Poll conducted by Edison Research. That’s an increase of one percentage point from. Obama captured 60 percent youth vote, compared with Mitt Romney’s 36 percent.

Headlines suggested a lack of enthusiasm among college students in this election and polling showed fewer were registered or planning to vote.

“The role young people would play during this election has been a major question in American politics for over a year, and it seems the answer is that they have been as big a force at the polls in as in ,” said Peter Levine, director of the youth research organization CIRCLE at Tufts University. “They again supported President Obama, although not as lopsidedly as. Until tomorrow, it will be unclear whether youth turnout — or the turnout of any group — rose or fell, but young people were proportionately well represented in the electorate.”

Top 3 Things You Should Know Before Election Day

All eligible citizens should take advantage of their fundamental right to vote. There is nothing more disappointing than showing up to cast a ballot for your preferred representatives and being turned away.

Here are a few tips to make your trip to the polls stress-free:

2) Preview your ballot at November6th

Here are some additional facts to be aware of:

Remember, this is your time to make your voice be heard! If you don’t fight for what you want, don’t cry for what your lost.