Another Voter ID win in Wisconsin!

It’s official: Voter ID will not be in effect in this year’s November elections in Wisconsin.

This means that Voter ID will almost certainly not be in effect in November’s elections. Let’s all take a moment to celebrate and get right back out in the streets getting people registered to vote! 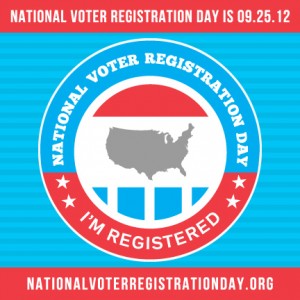 Last year, our friends at the Bus Federation had a brilliant idea; invent a holiday for voter registration! And this past Tuesday, September 25th, their dream became reality; the League joined with thousands of organizations and individuals around the country to participate in the first ever National Voter Registration Day.

Online, we registered almost 500 voters. In the field, our organizers nationwide registered 225 new voters. Nationwide, over 180,000 people were registered! Not bad for one day of registration, huh?

Last Day to Register to Vote is OCTOBER 9th

The last day to register to vote is OCTOBER 9th.  We’ll be all over Houston.  Visit us at one of the locations below to get registered to vote. (Please check site regularly for changes and updates to dates, times, and locations)
October 8th, 7-10 am – HCC Northwest (Alief) 2811 Hayes Road
October 9th, 7-10am – The Breakfast Klub, 3711 Travis Street

Will Milwaukee Mayor Barrett Embrace Technology And Social Media In His Budget?

This Thursday, Milwaukee Mayor Tom Barrett will be announcing his budget. Although the $1.5 billion figure seems like a major number compared to our personal household budgets, the truth is that our cash-strapped city government doesn’t have enough resources to tackle all the problems and opportunities that will pop up this next calendar year.

While local economists and fiscal watch dogs will ultimately chime in and critique the mayor on each and every line item, I personally believe that voters under the age of 35 should be concerned by what won’t be in the mayor’s budget, especially as it relates to information technology and new media.

Let’s face it, in this fast-paced era in which our global economies are increasingly connected by the Internet, our local governmental services are trapped in the stone age. Don’t believe me, just check out the city’s (or MPS’s or the county’s) website. While there are rumors that the city has developed a new site that will launch soon, anybody that has surfed the web over the last three or four years knows that a website is the most basic of virtual destinations. In fact, many large corporations have abandoned their bulky websites for more user friendly web platforms like WordPress that are easily customizable and maintained by third party service providers.

But I digress. The truth is that the mayor could use his budget to advance a new vision for the way that Milwaukee delivers information, provides services and tracks trends. And most importantly, the city could be saving money.

Take for example the city of Milwaukee’s much beleaguered Election Commission which recently saw Neil Albrecht taking the reins after a series of errors during the recent June 5th recall election. From not having enough voter registration cards to not properly training poll workers about the Voter ID injunction, most of the hiccups on this busy day could have been fixed with simple technology solutions. After all, while the commissioner complained that there wasn’t enough money in the budget to train new poll workers in a separate training, an online training video combined with a simple online class is very inexpensive (around $1000) to produce and could potentially stop expensive legal fees, prevent voter fraud and protect our democracy.

Of course, there are tons of other solutions that could be raised up in the mayor’s budget that could both save money and improve the efficiency of city services.

Take for example the many street shrines that pop up after murders. Over the years, the city has spent hundreds of thousands of dollars cleaning up these temporary memorials. But what if instead, the city developed mapping software that allowed family members to create virtual memorials with their phones and other mobile technologies. Instead of our streets being cluttered with stuffed animals and liquor bottles, we could be encouraging families and friends to keep the memory of their loved ones alive through virtual shrines that can never be taken down. This solution not only saves money, but also helps homeowners as liquor bottles and rain drenched teddy bears ultimately depress property values.

These are of course simple solutions that are very inexpensive, and there are tons of other ways to reduce printing budgets, and decrease labor costs all while improving connectivity and increasing participation in local government.

But the mayor has to be a champion of these innovations. After all, all studies show that young people are far less likely to participate in traditional forms of communication and media, and to continue to develop the city’s infrastructure around old media and distribution systems is extremely short-sighted and inefficient. Not to mention that an investment in new media could ultimately help foster an environment that could pull new businesses and entrepreneurs to the city.

While there are many old school/traditonal forces in our city government that resist these changes, the mayor is bolstered, whether he believes it or not, by a city that in which, according to the U.S. Census, 25 percent of its residents are under the age of 18.

Ten years ago, these simple technological advances may have been too expensive as shady consultants and opportunists frequently sold over-priced products to local governments, today these solutions are not only inexpensive, they are also vital for our city’s future if we are to once again become a global economic powerhouse. Mayor Barrett can either lead and change the city’s institutional culture through his budget or continue to punt the ball down the field for future budget cycles. Unfortunately, every year that Milwaukee refuses to innovate, we lose talented young people who move to other tech-savvy cities and we continue to develop goods and services that large segments of the population will never use. It’s time for Mayor Barrett to step into the future and become an advocate and champion for the next generation of Milwaukeans. His budget is a great place to start.