In a summer that has been marked by senseless youth violence, the Campaign Against Violence is hosting its sixth annual Put the Guns Down Rally to encourage youth and young adults to live less violent lives. This special event will take place at Washington Park areas 9 and 10 on Sunday, September 5th from 10:30AM - 6PM and feature free food, school supplies, games, music and a neighborhood march.

“We believe that there are so many positive people in this city,” said the Campaign Against Violence’s State Director Jayme Montgomery. “We want to celebrate all the great youth and young adults that live in our community.”

The Texas League of Young Voters Education Fund (Texas League) hosts the first of a series of facilitator trainings for community-based leaders and organizers. Facilitators are Texas League’s liaison to collaborating organizations who have committed to providing volunteers and resources to the Texas League’s voter registration and GOTV efforts. Marty Morrison (center picture), Community Outreach Officer, Harris County Tax Assessor-Collector and Voter Registrar’s Office, deputized facilitators at the training. For more information on becoming a facilitator or to get your organization involved, please contact Blake Green. 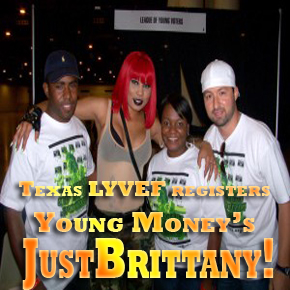