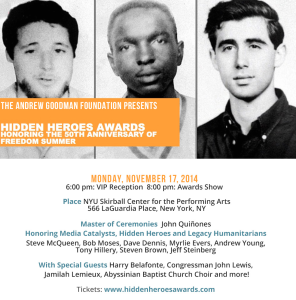 We’re excited to announce that we partnered with The Andrew Goodman Foundation to honor the 50th Anniversary of Freedom Summer at the 6th Annual Hidden Heroes Awards on November 17th at the NYU Skirball Center for the Performing Arts in NYC.

Click here to purchase your tax-deductible tickets for the Awards Ceremony and VIP Reception.  END_OF_DOCUMENT_TOKEN_TO_BE_REPLACED

Here’s your weekly quick look at a few developing stories in the political arena:

END_OF_DOCUMENT_TOKEN_TO_BE_REPLACED

The midterm elections are over (well, not counting Louisiana, but more on that later). Now that the dust has settled, the electoral landscape has decidedly changed. From races to key ballot measures, we’ve got you covered with the results of the most important results of the midterms. So who are the big winners of the election?

And finally, back to Louisiana. Voters in Louisiana will have to do it all over again for their senate race. Since no candidate was able to secure 50 percent of the vote, they will now have a run-off election on Saturday, December 6th between Sen. Mary Landrieu (D) and Rep Bill Cassidy (R). More about that here.

We hope you all voted. Though the election may be over, there is still much work left to be done. Keep tuned to the League of Young Voters for more great things and content to come! Follow us on Twitter and Instagram .